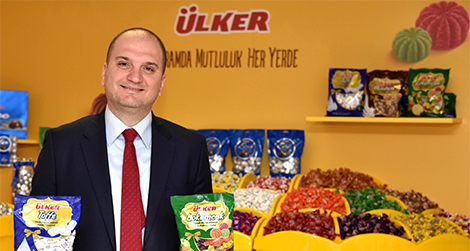 Ülker always begins its preparations months in advance, taking into account the needs of consumers. This year, they rolled out 28 new chocolate products and 29 candies.

Pladis Turkey’s President Mete Buyurgan stated that Turks consumed nearly 569 million Ülker chocolates in 2015 – that’s about seven times the population of Turkey itself. “Eid is an important time for us and customers alike. We make everything with great care. Customers love Ülker’s Ece, Çikolatin, Gum Mastic Toffee, and Lokumcuk candy at Eid.”

He added that Ülker alone held 32% of Turkey’s market share in 2015. When it comes to how they get ready for Eid, Buyurgan said:

Buyurgan noted that Ülker values customer feedback. “We’ve asked customers about what they think about Eid. They’ve reminded us once again Eid means being together, excitement, contentment, and diversity. On the last note, customers want their chocolate and other candy to be colorful, fun, exciting, and to reflect the true spirit of Eid. They place a lot of importance on variety, abundance, and presentation. Hence, we do our best to do the same.”

Note to the editor:

The chocolate industry in numbers

• Turkey’s chocolate market was at a turnover worth TL 5.3 billion liras in 2015. That is approximately 289 thousand tons of chocolate (Nielsen and Ipsos, Household Consumption Panel).

• Eid chocolate comes both boxes and in bulk (by the kilo). Turks prefer to give boxed chocolate as gifts during Eid, to buy bulk chocolate to serve their own guests at home.

• Almost everyone across Anatolia likes chocolate-coated hazelnut and peanut during Eid.

• Cacao butter gives chocolate a very special and delicate crystal structure. To maintain that, chocolate products must be kept between 18 and 22 ºC.

The candy industry with numbers