Bugs Bunny and Friends at the Circus with Ülker Smartt

Ülker Smartt is continuing its traditional mid-term break event and creating a more colorful world for kids. Ülker Smartt will be featuring Bugs Bunny, Tweety, Sylvester, the Tasmanian Devil and Daffy Duck at the Barcelona Circus.

Bugs Bunny and Friends are coming to Turkey with the world-famous Barcelona Circus, sponsored by Ülker Smartt. Performances of the “Bugs Bunny & Friends at the Circus” event will be held in Istanbul from January 28 to February 13, 2011.  Performances in Bursa, Izmir, Ankara, Kayseri, Adana and Mersin are scheduled later in the year.

The circus will also have many amazingly trained animals for the children to enjoy watching. Parrots, horses, dogs and monkeys will be performing… There will be acrobatic groups, balancing acts and jugglers, as well as clowns… The astonishing, fun and exciting shows will feature Bugs  Bunny, Tweety, Sylvester, Taz and Daffy in unforgettable roles. 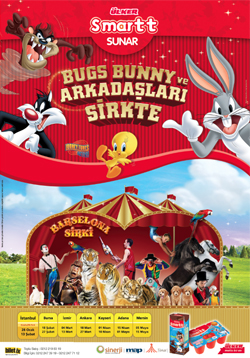 63 shows in 7 provinces
Ülker Smartt sponsored “Bugs Bunny on Ice” in 2009, “Bugs Bunny and Friends Basketball Show” in 2010. This year, Ülker Smartt will once again hold a mid-term school holiday event for kids.  The circus will hold 163 performances between February 28 and May 15 in 7 locales in Turkey. The main sponsor of the circus is Ülker Smartt.  For 3½ months children and their families will be able to go on an extraordinary adventure into a completely different world.