The Ülker Little Ones Basketball Festival is Finished

The Ülker and Turkish Basketball Federation Little Ones Festival was organized for the eighth time this year. The Festival, which took place in Çanakkale, lasted for 5 days and was participated in by 48 boys teams and 16 girls teams for a total of 64 teams from 32 provinces.

The Ülker and Turkish Basketball Federation Little Ones Festival was organized for the eighth time this year. The Festival, which took place in Çanakkale, lasted for 5 days and was participated by 48 boys teams and 16 girls teams for a total of 64 teams from 32 provinces.

The festival brought little athletes together in Çanakkale from the four corners of the country. The children were able to participate in sports for 5 days during the festival, at which the principle of team play was emphasized, thus there was no winning or losing. The little participants were also able to tour the Çanakkale monument in addition to playing basketball and had a great time at the talent show and picnic that was organized on the last day. The nearly 1,000 students that participated in the festival were given medals and certificates of participation. 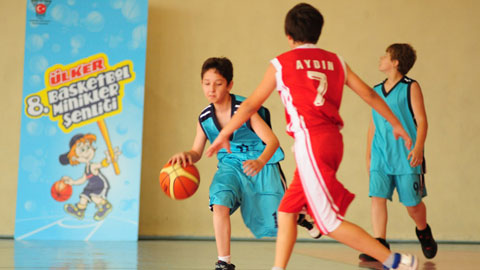 Yıldız Holding Corporate Communication Sports Sponsorships Manager Mehmet Uçan emphasized that they place high significance on participating in projects that provide education for children, enabling the potential in our country to be utilized in the most productive way and expand the reservoir of talent. He said, “As a brand that has been in sports for many years we place a lot of importance on cooperating with football and basketball clubs and federations to give our support to sports, the development of the sports industry and projects for children, who are the future of Turkey and Turkish sports.” Our goal is to contribute to the creation of healthy generations that have made sports a part of their lives. The basketball festival, which was organized by the Turkish Basketball Federation and supported by us, is an important activity in terms of children gaining the habit of playing sports and learning the concepts of being a team, sharing and showing respect for everyone in the game. The children also have the opportunity to see a different city, tour historical places of interest and gain knowledge. We have reached 5,000 children in the festivals that we have supported until the present.” For more information on the Little Ones Basketball Festival: