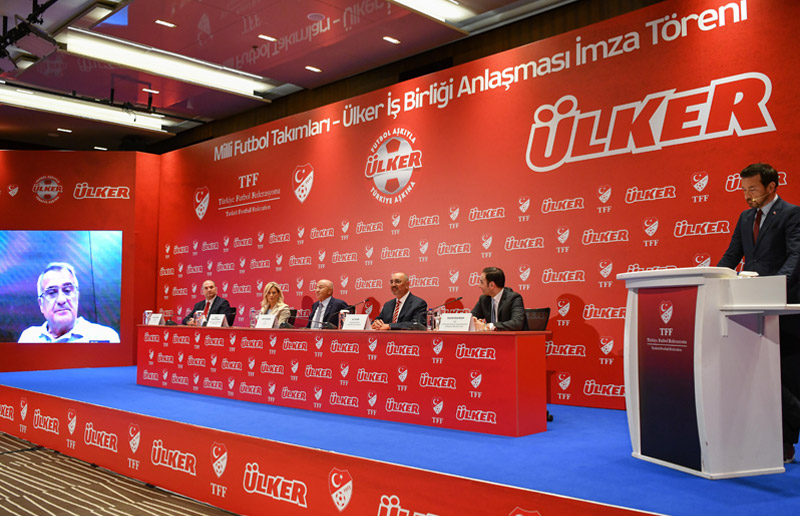 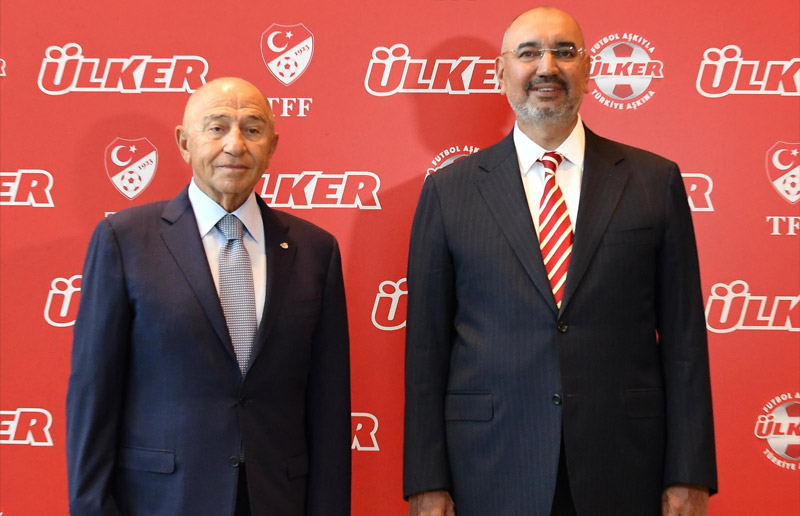 Ülker supports various sports, namely soccer and basketball. It recently signed an agreement with the Turkish Football Federation. For five years, it will become the official sponsor of the Men’s National Football Team as well as the main sponsor of both the Women’s National Team and e-National Team.

Ali Ülker (Chair of Yıldız Holding Board of Director) spoke at the signing ceremony at TFF Riva Facilities. “We represent Turkey in the world with our products, just as our national team does with their performance in football. The more goals they strike and the more games they win, the happier we get. We likewise promise to put a smile on their faces every time they bite into our products.”

The Turkish Football Federation’s President Nihat Özdemir said, “Ülker’s support has always made Turkish football stronger as well as boosted competitive prowess on the international stage. With this new agreement, we hope to succeed in a way that’ll put a smile on Turkey’s face.”

Ülker - Turkey’s leading food company - will sponsor the A National Football Team for five years. The move is expected to put a smile on all of Turkey’s face thanks to the team’s consecutive outstanding achievements. Ülker has also become the new official sponsor of the Men’s National Team and the the main sponsor of both the Women’s National Team and e-National Team. Among those at the ceremony: Nihat Özdemir (President of the Turkish Football Federation (TFF)), Ali Ülker (Chair of Yıldız Holding Board of Director), Alkın Kalkavan (TFF Sponsorships and Marketing Director; Foreign Relations Assistant Member), Mete Buyurgan (Ülker’s CEO), Şenol Güneş (Coach of the A National Team), and Necla Güngör Kıragası (Coach of A National Women’s Football Team Coach). The ceremony took place at the Riva Hasan Doğan National Team Camp Facility.

Nihat Özdemir: “With this new agreement, we hope to succeed in a way that’ll put a smile on Turkey’s face.”

President of the Turkish Football Federation, Nihat Özdemir kicked his speech off by acknowledging Ülker for supporting Turkey’s football teams. “Our collaboration with Ülker, one of Turkey’s oldest brands, means everything to us. Our previous wonderful partnership with them lasted 9 years. Now, we’ll pick up where we left off with this agreement. We are confident that their support will make us much more competitive on the world stage. After all, they’ve made unforgettable and invaluable contributions to Turkish sports – especially to spreading them. Beyond sponsorship, we must also engage in social projects as well. Within the past year, our Federation and Ülker have jointly launched many such social projects to encourage kids to play sports. Our efforts have paid off. Football Village alone has helped close to 200 kids make their way onto national and other professional [football] teams. Ülker has always believed in raising generations of children who love sports. That, in turn, has raised the bar in Turkish football. This agreement will drive us to flex our muscles before and at EURO 2020. I can only hope that our national teams will likewise support Ülker in its mission “to put a smile on people’s faces” with their victories. Our national teams embody the star and crescent (moon). I’m positive that they will make us proud again thanks to Ülker’s support and the support of our other sponsors and our people as well.”

Ali Ülker: “We are very happy to stand side by side the National Team”

Chair of Yıldız Holding Board of Director, Ali Ülker stated that supporting Turkish sports is one of Yıldız Holding’s biggest duties. “At Yıldız Holding and Ülker, we’ve been supporting Turkish sports for many, many years. Moreover, we do what we can to add value to Turkey’s economy through employment, manufacturing, and exports. Driving that is our desire to create a prosperous society by our philosophy of putting a smile a on people’s faces. The best way we can do that is by sponsoring sports and cultural activities with the aim to contribute to our society’s happiness. We represent Turkey in the world with our products, just as our national team does with their performance in football. The more goals they strike and the more games they win, the happier we get. We likewise promise to put a smile on their faces every time they bite into our products.”

Women must be present in all levels of society

Ali Ülker stated that Turkey’s A National Women’s Football Team is a huge role model. It shows girls that football isn’t ‘only for men’. It also makes people more aware about gender equality:

“Our agreement with the TFF means that we are hyping up our support for football. We are now the official sponsor of the Men’s National Team, and the main sponsor of both the Women’s National Team and e-National Team. Yıldız Holding runs a Women’s Platform to ensure - through various projects - that all of our female employees enjoy equal and effective participation in everything we do. We strongly feel that women have an active role in society, the labor force, sports, as every other sphere of life. This is why we are particularly happy to able to sponsor the Women’s National Team.”

Mete Buyurgan: “All of our products go off into the world with, “Made in Turkey” stamped on them.”

Ülker’s CEO Mete Buyurgan underlined that Ülker is working hard to add value to Turkey’s economy by ‘putting a smile on their customers’ – Turkish and international alike – faces every time they bite into one of their products’.

“Turkey is where we [i.e. Ülker] do everything: international business, manufacturing, exports, and job creation. We ship to over 100 countries on 6 continents. All of our products proudly carry “Made in Turkey” stamped on them. We wouldn’t have been able to achieve this without brand awareness, R&D, innovation, digitalization, investing in sustainability projects, or exports. The other key to our success is building strong, sincere and trustworthy relationships with customers. Why, you ask? Because we believe that putting a smile on people’s faces is the most important thing to pass ‘from hand to hand’. All of our national football teams have put a smile on all our faces every time they score a goal. It’s wonderful to be able to see Ülker and our country’s football join forces again.” Mete Buyurgan mentioned how e-sports has become popular among younger people. He said that Ülker has had many an opportunity to support both, and that all of us are delighted to be able to interact with them again on e-National Teams.”

Alkın Kalkavan: “We’re thrilled to have signed this agreement in this period”

TFF Sponsorships and Marketing Director and Foreign Relations Assistant Member, Alkın Kalkavan said that Ülker’s long-term support for Turkey’s national teams deserves admiration. “Our new sponsor Ülker is in fact familiar with all of our national teams because we’ve collaborated on many projects with them in the past. Anyone who has grown up in Turkey has had at least one memory involving Ülker putting a smile on their face. We’re no different. The pandemic has thrown us into difficult times. However, it hasn’t put a damper on how happy we are to have signed this important agreement – and right on the eve of Euro2020 at that! Within the past year or so, we’ve signed multiple business partnership agreements between our national teams and 11 brands, Ülker included. We’ve also renewed our agreements with two existing partners. Likewise, we’ve diversified our sponsorship structure and created special benefit packages for anyone wishing to partner up with us. We’d also proudly like to announce that – according to UEFA – we’re the only federation in Turkey to add seven companies to the Men’s A National Team’s sponsorship portfolio while also preserving our existing sponsorship quota.”

Coach of the A National Team, Şenol Güneş said Ülker has been sponsoring football for many years, and they are excited over this new agreement. “Our job gives us a sense of duty. Such agreements make us more committed, but also give us more responsibilities as well.”

Underscoring that Turkish people expect Ülker to succeed, Güneş also said: “We, the athletes, and the fans have become a massive family. If you couple that with the participation of other giant brands, then we have an extended family as well. We’re well aware that people both support us, and that they also expect a lot from us. We’ve always done what we can to meet those expectations, and we hope that we’ll be able to keep on doing so. We too have goals and dreams. We’re thrilled to be joined by other powerful sponsors as we go about enhancing the value of our brand. I hope that the agreement between Ülker and our federation will be auspicious for all parties and for Turkish football.”

Coach of A National Women’s Football Team Coach, Necla Güngör is also glad about the agreement. “Our agreement with Ülker means the world to us. I liken it to the reunion of two old chums. We used to collaborate on various projects to spread football’s popularity. Now, Ülker is backing our national football teams. Girls who – at one point or another – took part in Ülker’s Football Village project are now busting a sweat in the big leagues and proudly representing Turkey. That shows us just how precious our reunion is, especially when it comes to developing football. I feel that seeing the fruit of their labor makes them happy as well.

This partnership will undoubtedly help develop football in the coming period as well. I’m simply over the moon when I watch women’s football, because I know that I played a role in it. The hard work by our president, our board of directors, our administrators, and our ever growing list of sponsors joining has given football’s image in Turkey a leg up. This motivates us to work even harder. Women’s presence in Turkish Football is stronger than ever… and that couldn’t make us happier!

I sincerely hope that the Women’s National Team joins the ranks of FIFA, UEFA, and other major [international] tournaments sooner than later. Given that the A National Team recently echoed across Europe and the rest of the world, I’m certain that they won’t let Turkey down at the European Championships starting on June 11. We expect no less of our Women’s National Team either – they’ll show the world what Turkish women are made of. As my final word, here is to our newfound journey with Ülker! May it bring Turkish football good fortune. To everyone who contributed making this collaboration possible, thank you!”